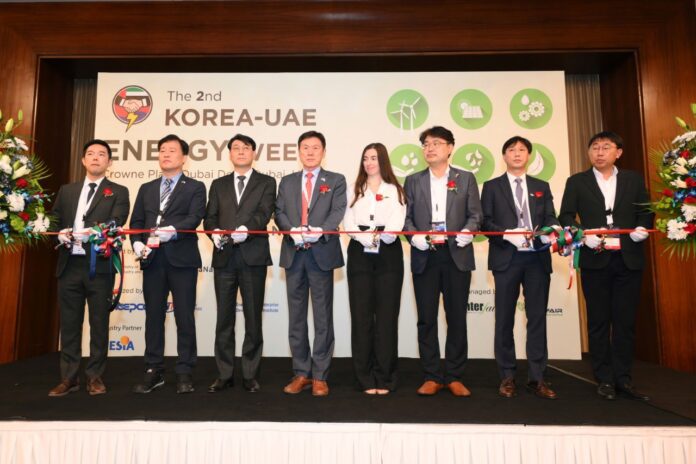 · CEPA will catalyse joint ventures, investments in renewables and carbon-neutral initiatives between Korea and the UAE

Dubai, November 11, 2022: Korean companies in the second edition of the Korea Energy Week UAE said they have bagged deals worth over AED 385 million during the two days of the expo, and said they are looking at deepening investments and business partnerships in the UAE in sustainable green energy initiatives with a Comprehensive Economic Partnership Agreement (CEPA) between the two countries in the immediate pipeline.

In a statement, organisers of the just concluded Korea Energy Week UAE 2022, Verifair Dubai, (www.verifair.org) said a majority of exhibitors at the show represented the renewable energy sector, keen to make inroads into the UAE’s sustainable energy market with the increasing focus on circular economy and carbon-neutral alternative energy projects, which will contribute to achieving Net-Zero emissions by 2050 for the UAE.

“There is a significant number of joint venture projects with the quantum of investments running into billions of dollars taking place in the UAE, Saudi Arabia and other countries in the region, which will mutually benefit both the countries in supporting strategic carbon neutrality in their respective countries,” said Mr. Chul Won IM, President, Energy Value Enterprise Development Institute (EVEDI)., adding that such partnerships are crucial to drive renewable energy projects and tackling climate change challenges as well as in reducing greenhouse gas emissions.

This year over 278 potential one-on-one partnerships meetings were held at the exhibition and so far 12 MoUs have been signed, while more are in the pipeline.

“The opportunities for Korean companies to join hands with Middle Eastern partners have significantly increased, particularly in the energy sector, and this will offer a win-win situation for businesses from both countries,” said Mr. Ki Hyun CHO, General Manager, KEPCO.

According to Mr. Dong Ok KIM, Director, Jeonnam Technopark, the scope for investments in renewable and alternate energy projects and in 4IR tech have also expanded. He cited some of the recent projects for green hydrogen and ammonia in the UAE and Saudi Arabia.

“Korea and the UAE have a strong bilateral relationship for over 40 years, and the impending CEPA will further boost this, added Mr. Jung Seob KIM, New Energy Industry Section chief, Jeollanam-do province.

The UAE is the largest trading partner of Korea in the Arab world with a bilateral trade valued at US$9.4 billion as of 2020 and more than US$2 billion in the first half of 2021.

“There are many more MoUs in the pipeline from the robust partnership meetings at the expo, and we are confident that the size of the deals will increase in the coming days as the discussions between many Korean and the UAE companies conclude,” said Jeen Joshua, Director, Verifair Dubai, adding that CEPA will be another milestone in catalysing bilateral cooperation between both the countries.

ECS Group is on a continuous voyage of Discovery