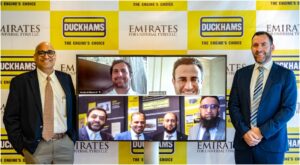 Duckhams, the Iconic Brand since 1899, launches in the UAE

Roambee’s success   Roambee’s success till date is largely attributed to the fact that we picked and solved some of the hardest problems in the industry. Our focus on innovation helped create a real-time solution to monitor market hired vehicles, LTL, and multi-modal shipments at a granular package-level. It helped us forge global network connectivity […]

Area 2071, the physical embodiment of the UAE Centennial 2071 Plan, has announced that it will be collaborating with global technology company SAP on innovations to help inspire creative minds and fuel digital government.

Roambee enters Southeast Asia IoT market Roambee, the Internet of Things (IoT) supply chain and enterprise asset visibility company, recently announced it has received US$2 million in funding from MDI Ventures, Telkom Indonesia’s corporate venture capital firm. With this, Roambee is nearing the completion of US$10M in funding and rapid expansion across seven countries in […]

Women in logistics For our people issue, what would be a better topic than tackling the ‘Women in Logistics’ theme? What we learnt from this exercise is that more needs to be done to highlight the many ladies working hard in logistics. So this is the first of many articles to highlight the hard work […]

JAFZA generates over US$83 billion in trade DP World, UAE region including Jebel Ali Free Zone (Jafza) has reaffirmed its position as the region’s top trade and logistics hub by generating 29.4 million Metric Tonnes (MT) of trade, valued at $83.1 billion in 2017. The figures contribute 23 per cent to the total value of […]

2018 Edition of Dubai HeliShow gears up with over 60 exhibitors and visitors from more than 30 countries   Top companies from Hungary, USA, Canada, Australia, Italy, France, Switzerland and UAE to showcase latest products & technologies in the helicopter industry as well as the defence and security sectors   The 2018 edition of the […]

Bosch develops safer cars   Beginning March 31, Bosch connected vehicles with eCall will automatically call for help in an accident. Thanks to the automatic eCall, emergency responders can arrive at the scene of an accident up to twice as fast. Regional specifications for the UAE and KSA are also underway On March 31, 2018, […]

Saudi Arabia develops natural gas industry   To diversify its domestic energy mix, the Kingdom of Saudi Arabia is investing in developing its natural gas resources. If the Kingdom is to make the most of the cost opportunity granted to it by oil, it must reduce the amount of oil used to generate power for […]

Etihad’s fuel saving initiatives Etihad Airways successfully eliminated around 195,000 tonnes of carbon dioxide emissions in 2017, thanks to a wide range of fuel-saving initiatives across its network. Following a number of improvements aimed at enhancing operational efficiencies, Etihad was able to reduce the amount of fuel consumed by its aircraft by over 62,000 tonnes. […]

Sustained success at Sohar Port   Mark Geilenkirchen, Chief Executive Officer, Sohar Port and Freezone, gives Munawar Shariff an update on the current growth in business for Sohar Port and what challenges it faces in the year ahead in making a better profit than ever before Additionally, our upcoming Sohar Port South expansion is fundamental […]

Saudi Aramco partners with Pearl Initiative to promote corporate governance World markets are rapidly evolving, and the Gulf region’s private sector has an increasingly global impact on this evolution. At the same time, global expectations of corporate governance standards have been rising, which in turn is having an impact on how companies in the Gulf […]

What lies ahead for the logistics and supply chain industry?

2018 will be about continued chaos, disruption, change and transformation across supply chains and logistics providers among other developments warns Tom Craig, President, LTD Management, in this outline. Brace for turbulence in 2018.