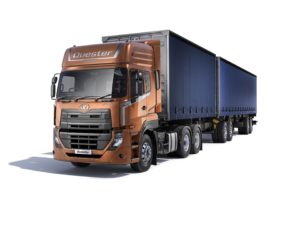 Launch of New Quester contributed to sales growth in UAE, Kuwait and Oman, with Saudi Arabia confirmed as a primary focus for 2020 after year of transition

The launch of the new, heavy-duty Quester, a series of major fleet deals and the announcement of a new retail partner in Saudi Arabia were among the highlights of 2019 as UD Trucks enjoyed another positive year across the Middle East, East and North Africa (MEENA) region.

Against the backdrop of extremely challenging economic conditions, the Japanese commercial vehicle brand that belongs to the Volvo Group recorded sales increases in a number of key markets, in particular the United Arab Emirates, Kuwait and Oman.

In the UAE, UD Trucks sales were up almost 10 percent year-on-year, despite the overall market shrinking. It was a similar story in Oman, with the market down but UD Trucks registering 10 percent growth. As a market, Kuwait bucked the regional trend with truck sales increasing, helping UD Trucks to an impressive doubling of sales. The company maintained its number one position in Bahrain, while reinforcing its position in Qatar as the number one brand in the Japanese truck segment and number three brand overall, including the European manufacturers.

2019 was very much a year of transition for UD Trucks in Saudi Arabia. Following a mutual agreement to terminate its collaboration with Rolaco Group, the brand’s previous partner in the Kingdom, UD Trucks announced Zahid Tractor as its new exclusive importer and distributor in the country. With the start of this exciting collaboration between the two companies, and underpinned by the ambition and professionalism of Zahid Tractor, 2020 is set to be an excellent year for the brand as it seeks to continue its growth and take customer satisfaction to a higher level.

UD Trucks has invested significant time and resources in the East Africa region in recent years as it seeks to reactivate its presence there. Last year it was rewarded for its reactivation of Ethiopia with a doubling of its market share, while the brand also helped to inaugurate a UN driver school in the country – under UD/Volvo Group’s sponsorship, UD Trucks supplied three Quester models and ran numerous driving school sessions. UD Trucks also re-commenced activities in Kenya, Uganda and Tanzania over the course of the year. 2020 will see a continued focus on this region, and particularly in Kenya where a local assembly project will be launched. 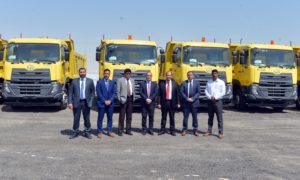 The new Quester and medium-duty Croner, both of which are designed and engineered especially for the region, have been in high demand and were at the heart of the numerous major fleet deals that peppered the year. In September the Kuwait Municipality took delivery of 106 Quester and Croner models for waste management use, while in the same month UD Trucks signed its first ever deal for 20 Quester 8×4 Mixers with Oryxmix in Dubai. A further 118 Questers and Croners were sold to waste management company Lavajet in the UAE and 25 to Oriental Trading Co in Qatar, with many other similar agreements signed across the GCC and East Africa.

Mourad Hedna, President of UD Trucks MEENA, commented: “In 2020 we will continue our strategy to grow by reinforcing our market share in countries where we are already present and by entering a number of new markets. Our objective always has been, and always will be, to deliver the highest standards of customer service because this is the only way to guarantee sustainable growth in the long-term. We will continue to do this by collaborating closely with our regional partners while simultaneously remaining focused on that most valuable human capital: our employees. 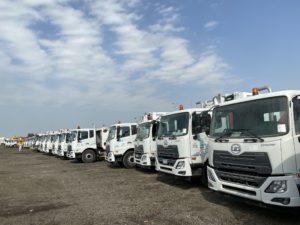 “Having strong partnerships in each market is critical to our success, so it was a positive reflection on how we are doing that so many of our partners reconfirmed UD Trucks as their brand of choice, over the course of the year, highlighting their pride in working with the company and the very special family spirit that exists among all parties. This essence of close and positive collaboration was strengthened by the bodybuilders conference that was held in August and the annual partners conference that took place in September.”

UD Trucks is a proud member of the Volvo Group, which in 2018 saw a year-on-year increase in sales of nine percent and employs a workforce of 100,000 employees globally.

For more information from the UD Trucks, please visit: http://www.udtrucks.com/en-int/home