Turkish Airlines’ successful air cargo brand, Turkish Cargo managed to increase its cargo tonnage by 9.6 percent in February despite the shrinking in the global air cargo sector. The air freight company steadily continues towards its goal of becoming one of the top five of the world’s air cargo brands. 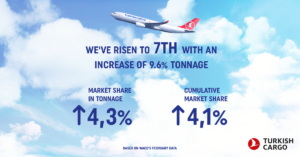 Continuing its growth during the 2019 which also had the world’s biggest moving operation, Turkish Cargo managed to rise to the 7th spot in the WACD (World Air Cargo Data) with 9.6 percent increase in its tonnage despite the 5.8 shrinkage in the air cargo market along with 5.7 percent fall in the demand according to IATA (International Air Transport Association) reports during January and February.

Successful air cargo brand increased its market share in the sold tonnage by 0.6 points in the first two months of the year compared to last year and reached a growth of 4.3 percent while increasing its cumulative market share by 0.4 points to 4.1 percent and achieved a sustainable growth. 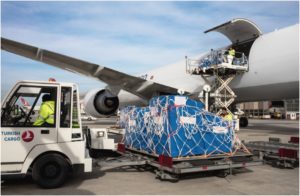 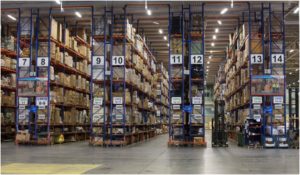 On this successful performance of Turkish Cargo, Turkish Airlines Chairman of the Board and the Executive Committee, M. İlker Aycı stated the following; “We are happy about the continuous rise of Turkish Cargo in the global air cargo market. We can’t say that the success we achieved during the first two months of 2019 was a surprise. We continuously experience these exciting achievements especially in recent years. For instance, in the last two years, we rose from 12th place to 7th place after surpassing five big global air cargo brands from Europe and Far East. Especially considering that the shrinkage in the demand for the market causes gloom in the sector with disappointing numbers, this success brightens the future of Turkish Cargo even more. With our determination and growth strategy in the air cargo market, Turkish Cargo will be one of the top five air cargo brands in the world. I express my thanks to all my colleagues who contributed to this success.”

Reaching 307 destinations in 124 countries with belly capacity of Turkish Airlines and additionally operating dedicated cargo flights to 86 destinations with its fleet of cargo planes, Turkish Cargo continues to increase its service quality everyday with its current infrastructure and investments.

As one of the world’s fastest growing air cargo brands thanks to the new destinations added to its flight network, Turkish Cargo continues to increase its success bar every day by combining its varied service range and operational capabilities with Turkey’s unique geographical advantages.