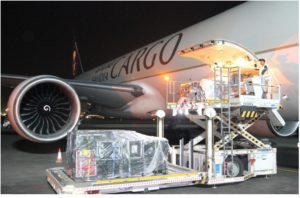 Saudi Airlines Cargo Company transported 175 Tons of World Wrestling Entertainment (WWE) equipment all the way to Jeddah, from Maastricht in the Netherlands for the WWE event that will take place at King Abdullah Sports City on June 7.

Saudia Cargo has successfully provided all its logistical capabilities to bring the WWE wrestling ring equipment of the show that were forwarded by Sound Moves via Saudia Cargo freighters; Boeing 747-8 & Boeing 777 carrying total tonnages of 175 tons & delivered on the 22th of May, moreover, the company provided special Ground Handling for the heavy loads at King Abdulaziz International Airport’s Cargo station. 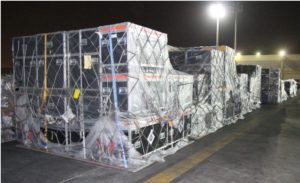 The CEO of Saudia Cargo Omar Hariri stressed on the national role played by Saudia Cargo in supporting national & global events, expressing the company’s pride in collaborating towards the success of this distinguished sporting event.

In addition, Saudia Cargo supports & transports this global sporting event for the third time after the huge success in the past two times.

Saudia Cargo, the national Saudi air freight carrier, offers its services to 225 international destinations & 26 routes within the Kingdom of Saudi Arabia, a member of SkyTeam Cargo (www.skyteamcargo.com), the world’s leading cargo alliance established in 2000, further expanding its global network with SkyTeam Cargo members reaching across 900 destinations in more than 175 countries, through a dedicated state-of-the-art freighter fleet.