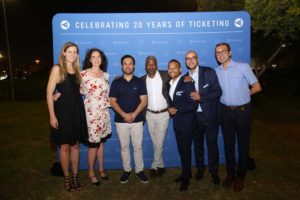 Over 150 guests attended the reception at a top Dubai hotel

Germany, headquartered Hahn Air recently celebrated its 20th anniversary commemorations of its founding and sixth birthday commemorations in Dubai. Among the participants were travel agents, distribution partners, media and other stakeholders.

The guests celebrated in Hahn Air’s signature colour blue, and witnessed great performances with live music, traditional dances and a light-show-act. They also took the opportunity to pose alongside a life-sized Martin, the Hahn Air mascot.

Hahn Air’s Vice President of Sales and Agency Distribution, Kimberley Long, welcomed the attendees and thanked them for their trust and loyalty. “We are so thrilled to celebrate with our partners in Dubai. A big thank you to all travel agents, Global Distribution Systems (GDS) partners, online travel agencies, tour operators and consolidators in the UAE and Middle East who trust in our solutions,” she remarked.

“It’s been many years of fruitful cooperation and continual growth we look forward to the next 20 years. We remain committed to expanding our network of airline partners and our portfolio of services,” she added.

Hahn Air offers its distribution services exclusively to transportation companies and ticketing solutions to travel agents only. However, travellers benefit as well as they are able to choose from more carriers, more routes and more destinations. Every year millions of passengers travel between 4,000 locations using Hahn Air’s HR-169 tickets.

It is the first and only airline worldwide that offers free and comprehensive reimbursement in case of insolvency of the operating carrier. Hahn Air is a member of the International Air Transport Association (IATA) and a globally connected stakeholder playing a leading role in the airline industry.

Hahn Air is 100% owned by the Hahn Air Group, an international corporation based in Dreieich near Frankfurt, Germany. The fleet of Hahn Air Lines operates out of the airports Dusseldorf and Frankfurt Egelsbach.

The Group, which has offices around the world, including Minneapolis, Montevideo (Chile), Casablanca, New Delhi, Manila and Johannesburg, achieved an annual global turnover of approximately US$ 1 bn in the last fiscal year.