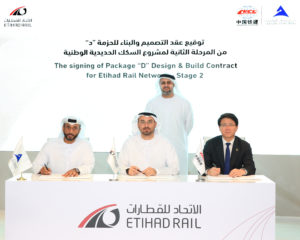 His Highness Sheikh Theyab bin Mohamed bin Zayed Al Nahyan, Member of the Abu Dhabi Executive Council, Chairman of Abu Dhabi Crown Prince’s Court and Chairman of Etihad Rail, has supervised a board meeting during which he approved a AED 4.6 billion tender for the civil works and construction of Package D of Stage Two of the UAE’s national railway. Package D will link the ports of Fujairah and Khorfakkan to the network at the Dubai border with Sharjah, and stretches over a distance of 145 kilometres. Through connecting key ports to manufacturing, production and population centers, Package D will connect to quarries for building material in the Northern Emirates, contributing to the improvement of the transport and infrastructure industries in the UAE.

Etihad Rail awarded the contract of Package D to a joint venture of the China Railway Construction Corporation, CRCC, and National Projects and Construction, NPC. The agreement signing was attended by His Highness Sheikh Theyab bin Mohamed bin Zayed and Wenzhong Wang, Vice President of the China Railway Construction Corporation and the agreement was signed by Shadi Malak, Etihad Rail Chief Executive Officer, Zhao Dianlong, the representative of CRCC and Hamad Al Amri, Managing Director of of NPC.

Speaking on the importance of the contract, His Highness Sheikh Theyab bin Mohamed said: “The awarding of this contract is a highly significant achievement as Etihad Rail follows its path to progressing one of the most important and economically strategic projects in the UAE. While expanding a vital sector that constitutes the lifeline of our national economy, we continue to provide a safe, modern, and sustainable national railway network that meets the aspirations and expectations of our nation and its leaders, supporting the UAE’s position as a major link in the regional and global supply chain, and as a key player in the logistics system.”

Linking the ports of Fujairah and Khorfakkan to the railway network, will allow the transportation of up to two million TEU’s (twenty-foot equivalent container units) per year, thus promoting international trade. In addition, Etihad Rail trains will carry up to 30 million tons of construction material annually to distribution centres in Abu Dhabi and Dubai, cutting the overall cost of transport and reducing on-road truck trips by more than 2,000 journeys per day.

This will contribute to the improvement of the UAE’s freight and transport sectors by enabling faster and more efficient distribution of goods by linking the UAE’s principal centres of manufacturing, production and population to strategic ports, facilitating the advancement of economic and social development and achieving a quantitative boost to the freight traffic and logistics sector.

Etihad Rail has previously awarded contracts for the Design and Build of Package A to a joint venture between the China State Construction Engineering Corporation and South Korea’s SK Engineering and Construction, and Packages B and C to a joint venture between the China Railway Construction Corporation and the Ghantoot Transport & General Contracting Company. This comes as part of the company’s mandate to establish a 1,200 km national railway network, which will also form an integral part of the proposed GCC Railway.