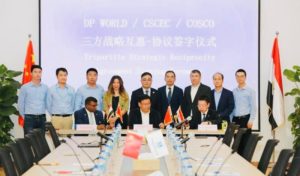 DP World Sokhna recently entered into a trilateral partnership with the China State Construction Engineering Corporation (CSCEC), and the China Ocean Shipping Company Ltd (COSCO), to serve as the hub for all construction material imports needed to build the central business and financial district of Egypt’s new administrative capital.

As part of the agreement, CSCEC, the largest construction conglomerate in China and the company in charge of developing the central business and financial district in the new capital, will benefit from Sokhna’s proximity to the new capital and its advanced road and rail links, in addition the Port’s strategic location just below the southern entrance to the Suez Canal, on the Red Sea, a key gateway for Asia, Europe and other international markets.

Located approximately 50km east of the current capital Cairo, Egypt’s new administrative capital will cover an area of 700km2 and will be capable of accommodating 6.5 million people, when completed.

Suhail Al Banna, CEO and Managing Director of DP World Middle East and Africa said: “Our strategic partnership with the China State Construction Engineering Corporation and China Ocean Shipping Company provides the opportunity for DP World Sokhna to expand its role in supporting Egypt’s economy by serving as the exclusive port for all of the central business district’s cargo, and ultimately, companies who will be setting up their operations in the new capital.”

As a driver for economic growth, job creation and urban transformation, the new capital is a $45 billion mega-project and one of the key development projects that are being rolled out by the Egyptian government. Moreover, the government plans to relocate ministries, parliament and civic institutions to the new capital.

When completed in the second quarter of 2020, Basin 2 will nearly double capacity at the port to 1.75 million TEUs per year.