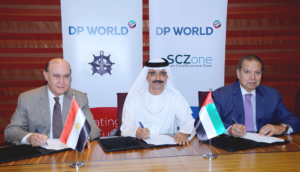 A Memorandum of Understanding (MoU) agreed by DP World, Egypt’s Holding Company for Maritime and Land Transport and the Suez Canal Authority is aiming to develop a new Inland Container Depot (ICD) in Egypt’s 6th of October City, a satellite town in the Giza Governorate and part of the urban area of Cairo.

The three partners will bid for the government contract for the project later this year. The proposed ICD will increase the flow of cargo between ships and major land transportation networks in the country, creating a central distribution point. Under the MoU, DP World will lead and represent the alliance in the bidding process and become the ICD operator if the tender is won.

DP World Group Chairman and CEO Sultan Ahmed Bin Sulayem, said: “Developing trade infrastructure to improve hinterland access for goods bound for Africa’s growing economic needs is essential. This collaboration builds on our strategic partnership with Egypt and we look forward to working with the SCZone and the government’s Holding Company for Maritime and Land Transport to make it happen. The partnership is aligned with the UAE leadership’s directive to share with neighbouring nations the global experiences that our country has gained over the years. We are proud to support the Egyptian government’s drive for economic growth, led by President Abdel Fattah el-Sisi and the collaboration further builds on our historical ties with the country where we have been operating Sokhna Port for 10 years and have become an integral part of the social and economic fabric.”