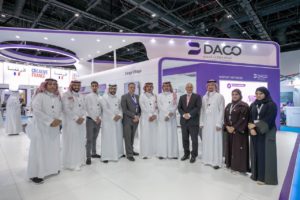 Dammam Airports Company (DACO), successfully concluded its participation at this year’s edition of the Airport Show 2019, a leading global event in the field of building and equipping airports, which was held from April 29, 2019 to May 1, 2019 at the Dubai International Convention and Exhibition Centre. During their presence at the show, which is being held under the patronage of His Highness (H.H.) Sheikh Ahmed Bin Saeed Al Maktoum, Chairman of Dubai Airports, President of the Dubai Civil Aviation Authority and Chairman & CEO of the Emirates Group, DACO showed its key series of projects that are part of its continuing strategic expansion initiative.

Turki Abdullah Al Jawini, CEO, DACO, said, “we are pleased to witness the strong response that we have received from our participation at this year’s Airport Show, which brings together some of the world’s leading major companies in the aviation sector and relevant experts to exchange best practices and the latest innovations to support operational capacity building and operational efficiency for airports.”

He added, “Our presence at the event gave us the opportunity to present our diverse range of projects and achievements at King Fahd International Airport, which is currently taking key steps towards achieving our strategic goals. In fact, we have already welcomed 2,581,724 passengers during the first quarter of this year, while the total number of flights in the same period also reached 24,000 trips–showing a steady growth of eight per cent in the number of passengers as compared to 2018.”

“Having been able to present our projects demonstrates our commitment towards ensuring a seamless flow of passengers and aircraft, maintaining the security and safety of our operations and improving and enhancing the airport’s services to be ranked among one of the world’s best airports. Our presence at this event also reflects our ability to adopt emerging global trends and work in line with the strategy to further develop the airport’s operations via projects that are expected to extend until 2041. These initiatives include the development of runways and parking lots; the rehabilitation of the baggage handling system and other projects aimed at the comprehensive development of infrastructure and all facilities at the airport,” concluded Al Jawini.

In addition, DACO also presented some of its newer projects in the airport’s cargo village, which is currently being completed in time for the launching of the third phase of the village. One of the projects is the opening of Bonded Zone, which is expected to be completed by the fourth quarter of 2019. Meanwhile, the fourth phase will include the Logistics Zone, the provision of various solutions for distribution and general storage. In retrospect, the first and second phase of DACO’s cargo village feature seven companies in Express Cargo and Air Cargo.