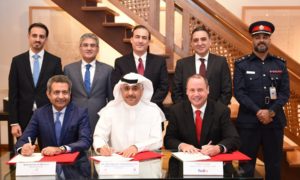 The multinational courier delivery services company will be occupying a total of 9,000sqm out of the 25,000sqm available space in the new Air Cargo Area, of which 5,000sqm will be warehousing and the rest will be manoeuvring area.

His Excellency the Minister of Transportation and Telecommunications and Bahrain Airport Company (BAC) Chairman Eng. Kamal bin Ahmed Mohammed, said: “BAC has a comprehensive plan to attract prominent cargo companies to the Kingdom, which will strengthen Bahrain’s strategic position as a leading provider of efficient logistics services in the region. We are currently negotiating with two other companies wishing to operate warehouses at the new Cargo Area, which further demonstrates the Kingdom’s strong reputation as a regional hub for logistical services in the GCC and wider Middle East.”

His Exellency added: “The new Air Cargo Area that BAC is constructing north of the runway is an important part of the overall growth strategy adopted by the Ministry of Transportation and Telecommunications, and a key component in the Airport Modernization Program (AMP), which is due to be completed by Q3 2019. It also reflects the important steps that the company is taking to enhance the airport’s infrastructure and increase its ability to accommodate rising local and regional demand. The new Cargo Area will create more job opportunities and enable the airport to handle larger volumes. This is in line with government-led initiatives aimed at expanding the Kingdom’s logistics sector, which began in 2015 via the Bahrain Logistics Board chaired by His Royal Highness the Crown Prince, Deputy Supreme Commander, and First Deputy Prime Minister, Prince Salman bin Hamad Al Khalifa.”

The Minister also noted that the continuous cooperation and coordination between BAC, Customs, and the EDB played a major role in the fruition of this agreement.

President of the FedEx Express Middle East, Indian Subcontinent and Africa (MEISA) region James R. Muhs, said: “The GCC is an important region for FedEx Express, where enhanced collaboration between public and private sectors is fueling growth across industries. The logistics market forms a fundamental part of the GCC economy, and we remain committed to serving our customers across Bahrain and connecting them with people and possibilities around the world.”

His Excellency Khalid Al Rumaihi, Chief Executive of the Bahrain Economic Development Board (EDB), said: “This Letter of Intent further highlights the strength of Bahrain’s transport and logistics sector and supports our strategic focus on e-commerce and regional distribution. There are a number of opportunities for companies like FedEx Express in the GCC’s US$1.5 trillion market, and Bahrain is an ideal location from which to access those markets due to our fast and direct transport links, some of the regions lowest operating costs, and a highly skilled, bilingual workforce.”

BAC signed an agreement in November with French engineering firm, Egis for design and supervision for the new 25,000-square metre Cargo Area, which comprises warehouses, aircraft parking, and associated infrastructure aimed at handling air cargo traffic and e-commerce. The Cargo Area is also equipped with the latest technologies, making it one of the most attractive locations for investment in the Middle East.