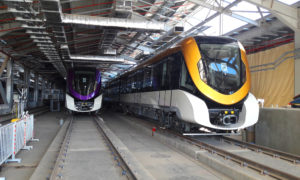 Alstom has, for the past few weeks, been conducting initial dynamic tests for the Riyadh Metro Project at the FAST consortium Line 4 Depot Test Track in Riyadh, Kingdom of Saudi Arabia. The Riyadh Metro Project, owned by Arriyadh Development Authority (ADA), consists of 6 lines totalling 176 km and 85 metro stations.

The test campaign includes the demonstration of the performance of the railway system, from power supply to signalling systems, using the trains which have already been delivered.

“This test run is a significant milestone for Alstom and for the project. We are proud to conduct the tests in Riyadh in order to deliver a state-of-the-art metro to our customer Arriyadh Development Authority (ADA) and the inhabitants and the visitors of Riyadh“, said Didier Pfleger, Senior Vice President for Middle East and Africa.

The trains are driverless. The train movements are protected by a state of the art signalling system controlling the speed of the trains, ensuring smooth and safe operations including automatic opening of the train doors. The fully air-conditioned stations are equipped with platform screen doors also preventing people to access the track. The trains are also equipped with an advanced passenger information system delivering real time information to the passengers through screens and loudspeakers on board the train and on the station platforms.