Hyperloop Accelerates with 100 Engineers from Altran

The agreement between HyperloopTT and Capgemini’s Altran, the world-leader in engineering and R&D services, strengthens HyperloopTT’s technical presence and will focus on accelerating systems integrations for passenger commercialization in the heart of Europe’s Aerospace Valley in Toulouse, France.

HyperloopTT announced today an agreement with world-leading engineering and R&D services provider Altran, part of the Capgemini Group. The agreement includes one hundred Altran engineers to accelerate the development of commercialized passenger hyperloop systems at the HyperloopTT facility in Toulouse, France, the Aerospace Valley of Europe. HyperloopTT’s European R&D Center is the home of the world’s only full-scale hyperloop system, which has been undergoing testing and optimization since 2019.

The agreement advances HyperloopTT’s capabilities in a lean way, negotiated within HyperloopTT’s hybrid collaborative framework. The announcement comes after recent commitments from both the European Union and the United States, emphasizing the development of commercial hyperloop systems as part of a broader post-pandemic economic solution focused on sustainable high-speed transportation and infrastructure.

“We’re seeing more and more major players in technology and transportation embrace hyperloop as the future of sustainable high-speed travel, and we welcome Altran to the HyperloopTT global movement,” said HyperloopTT CEO Andres De Leon. “Our business model has enabled us to add their top-tier engineering expertise in aerospace, aeronautics, and systems engineering.”

“HyperloopTT is leading the way in profitable and sustainable high-speed infrastructure,” said Altran Executive Vice-President William Rozé. “Our work together will make the HyperloopTT European R&D Center at Aerospace Valley, the epicenter for hyperloop engineering worldwide, while building upon the long tradition of transportation innovation and leadership in Toulouse.” 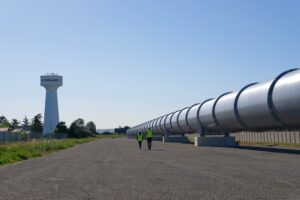 HyperloopTT’s continued European-based development has accelerated the adoption of commercial hyperloop systems across the continent. Since reaching an agreement with the City of Toulouse in 2017, HyperloopTT has led international hyperloop regulation efforts from its full-scale test site. After developing the world’s first hyperloop insurance framework with Munich Re, HyperloopTT completed the first set of safety and certification guidelines for hyperloop systems with TÜV SÜD and delivered them to the European Commission. HyperloopTT is committed to demonstrating that hyperloop is a sustainable near-term infrastructure project that can solve the congestion, sustainability, air quality, infrastructure, and competition concerns that face the European Union.