Turkish Cargo brought the circus lions to their natural habitat. 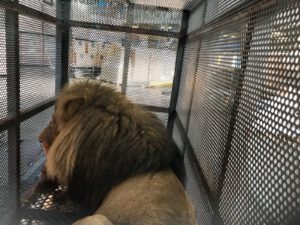 Offering service to 124 countries and being the fastest-growing air cargo brand around the world, Turkish Cargo has brought the three young lionesses Luca, Charlie, Kai and the young lion Nathan to South Africa, their natural habitat, from Kiev with a connection flight from Istanbul, as driven by our respectful attitude to animal rights.

The young lion Nathan and the three young lionesses Luca, Charlie and Kai had been used as circus animals and had been placed in a concrete and steel cage of 35 square meters in Ukraine under harsh conditions without direct sunlight and clean air, far away from their natural habitat.

The lions were saved by the Lawrence Anthony World Organization (LAEO), an organization that acts with the mission of defending animal rights, and were transported to their natural habitat in South Africa under the sponsorship by the global air cargo brand Turkish Cargo.

The lions were transported in specially-designed containers, where their nutritional needs were met, and they were accompanied by their keepers, specially-assigned veterinarians, an authorized person from the Lawrence Anthony World Organization and IATA LAR (IATA Live Animals Regulations) certificated Turkish Cargo personnel during the flight.

After a long flight covering almost 9 thousand kilometers, the lions were set free at Kragga Kamma Natural Park, a natural habitat embracing huge animal populations of Africa and offering all-green coastal forest and meadows extending along 14 thousand square meters. Initially having some difficulties to get used to their own habitat as they got used to the conditions of the circus, the lions will discover their real habitat and freedom with their new friends from now on.

Having ratified the ‘United For Wildlife (Buckingham Palace) Declaration (UFW)’ in 2017 for the purpose of preventing illegal wildlife trade and increasing the industrial awareness thereto, Turkish Airlines has highlighted its cognizance of the live animal transportation processes and animal rights.

Showing utmost care for live animal transportation service and creating real-like natural habitats on the skies, Turkish Cargo takes the IATA LAR regulations and the CITES guidelines as the reference for the acceptance, storage and shipment processes, and it meticulously implements the documentation, encaging, labeling and marking guidelines as described under the said regulations.