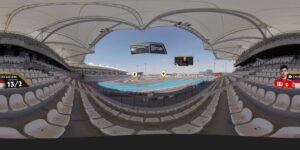 Damon Hill, the 1996 World Champion, counts more than 22 victories in his list of achievements. He commentates on the highlights of the view from each grandstand. The series of videos has been launched by Etihad Airways on the airline’s YouTube channel to engage with fans ahead of this year’s final race of the season. After watching the videos, fans can win one of ten tickets to the Formula 1™ Etihad Airways Abu Dhabi Grand Prix in 2021 by visiting etihad.com/F12020 and voting for their favourite grandstand.

Yasser Al Yousuf, Vice President Commercial Partnerships, Etihad Aviation Group, said: “As the title sponsor, Etihad has looked at exciting ways of using immersive digital content to bring the Formula 1 experience to the screen. This collaboration with Damon Hill brings the thrill of the grandstands to life and we hope this will excite fans ahead of the final race of the season in Abu Dhabi. We have many highlights to look forward to over the coming weeks – including carrying the drivers, support crew and officials to Abu Dhabi ahead of the finale.”