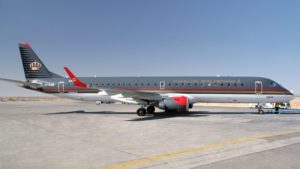 The three-year contract encompasses landing gear overhauls for one Embraer 195 and two Embraer 175s. In addition, Hawker Pacific will support Royal Jordanian with landing gear spares on a loan- and exchange-basis. The first overhaul of the aircraft’s landing gears in Hawker Pacific’s Sun Valley facility is scheduled for November 2019.

Lufthansa Technik already has a decades-long business relationship with Royal Jordanian, that in addition to the new contract emcompasses both landing gear services as well as a Total Component Support (TCS®) for the airline’s Airbus A320 fleet.

Royal Jordanian’s President and CEO Stefan Pichler said: “We are glad to partner with Hawker Pacific being a leading landing gear repair and overhaul provider. We believe that their high-quality standards and timely services will support Royal Jordanian’s continued keenness to maintain our aircraft in their best performance. This agreement will further enhance our historical cooperation with Lufthansa Technik.”

Bernd Freckmann, Chief Executive Officer of Hawker Pacific Aerospace, further added that the company “is proud to serve Royal Jordanian with Embraer landing gear overhaul services, a product where Hawker Pacific Aerospace was and is able to demonstrate great experience and quality. We are dedicated to provide Royal Jordanian with the high level of quality they have experienced within the Lufthansa Technik Group”.

Being a leading carrier in the region, Royal Jordanian’s (RJ) vision is to be the Airline of Choice that connects Jordan and the Levant with the world. Back in 1963, RJ was established by a Royal Decree, as the national air carrier of the Hashemite Kingdom of Jordan. From its hub at Queen Alia International Airport, RJ operates a fleet of

26 aircraft to reach 45 direct destinations providing an extensive travel network for its guests via Amman to Europe, the US and Canada, North Africa and the Far East. RJ is also a member in the oneworld airline alliance, along with big names in the air transport industry.

As for air freighting, Royal Jordanian is a leading provider of air cargo services in the Middle East, offering fast, reliable and safe shipping services. RJ’s cargo sector plays an important role in enhancing the national economic development and supporting Jordan’s exports of vegetables, fruits, garments and pharmaceuticals, in addition to the courier mail. The airline is currently implementing a five-year turnaround plan that consists of four main pillars, including being the number 1 carrier in the Levant, achieving sustainable profitability, being a Customer Champion and an Employer of Choice.