Mark Geilenkirchen, Chief Executive Officer, Sohar Port and Freezone, gives Munawar Shariff an update on the current growth in business for Sohar Port and what challenges it faces in the year ahead in making a better profit than ever before

Additionally, our upcoming Sohar Port South expansion is fundamental to Oman’s national focus on growing the logistics and industry sectors as part of its ongoing economic diversification efforts 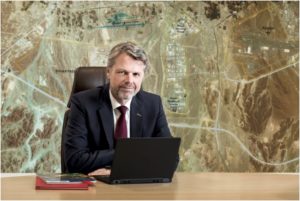 One of our primary goals is to capture a larger portion of the food cargo trade in the region, and the new state-of-the-art Agro Cluster is an important component of the Oman government’s long-term food security strategy

The Sohar Port South expansion, which is at its final stages, is one of our major projects in 2018. We are reclaiming around 200 hectares from the sea (adding to the port’s existing 2,000 hectare capacity)

Despite volatility in the global maritime sector, Sohar maintained steady growth over the course of 2017 and successfully handled an average of over one million tonnes of cargo every week in the same year. The port’s container traffic increased by 36 per cent as compared to 2016 and dry bulk output saw a rise of 25 per cent. Sohar Port has received 3,075 vessel calls in 2017, which marked a significant increase of 17 per cent, despite the fact that the global trend leaned more towards consolidation and larger ships.

“We expect this number to increase further this year, due to the new bunkering facilities that we will be introducing in 2018 alongside the new Sohar Port South expansion and the completion of the new Food and Agro Cluster,” says Mark Geilenkirchen, Chief Executive Officer, Sohar Port and Freezone.

Oman is also experiencing solid growth in the food logistics sector and e-commerce. Rapid development of transportation infrastructure and demand for modern warehouses equipped with IT, are the key drivers behind influencing the growth of the industry. “We aim to prepare ourselves to adapt to these changes and establish ourselves as a leader in the region,” continues Geilenkirchen.

“Additionally, our upcoming Sohar Port South expansion is fundamental to Oman’s national focus on growing the logistics and industry sectors as part of its ongoing economic diversification efforts,” he says. This expansion will aid the steady growth in aggregate cargo volumes and investments at the port by delivering additional cargo capacity and attracting more business to Sohar.

“One of our primary goals is to capture a larger portion of the food cargo trade in the region, and the new state-of-the-art Agro Cluster is an important component of the Oman government’s long-term food security strategy,” says Geilenkirchen. The dedicated terminal features remote-controlled quay cranes, 450 reefer plugs and is equipped for an initial throughput of 1.6 million tonnes/year.

The sugar refinery is privately owned by the Oman Sugar Refinery Company; a governmental strategic food reserve facility regulated by the Public Authority for Stores and Food Reserve. The sugar refinery will boast a production capacity of one-million tonnes per annum. The grain milling plant is owned and operated by Sohar Flour Mills and will have a capacity of 500 tonnes per day.

This combination of food storage resources such as packaging materials from a plastics facility for PET due to open by 2020, alongside available steel and aluminum feed stock, and world-class logistics, makes Sohar an attractive option for investors looking for the perfect Middle East hub for food production. The new Food Cluster is set to play a major part in Oman’s plans to expand its food-processing sector.

“The Sohar Port South expansion, which is at its final stages, is one of our major projects in 2018. We are reclaiming around 200 hectares from the sea (adding to the port’s existing 2,000 hectare capacity) starting with approximately 50 hectares in the initial phase and adding more land area in later phases,” says Geilenkirchen. The second phase will be focused on hosting new industries that require deep water berths. “Trescorp, a Singapore-based oil and petroleum products trading firm, is one of the first investors to benefit from our new deep water project,” he says. Other investors are also being lined up to take advantage of the additional 150 hectares being offered as part of the Sohar Port South expansion.

Due to its close proximity to the bustling petrochemicals cluster, including the Liquid Berth and Tank Terminal, this expansion will be assigned almost exclusively for oil and gas-based investment.

Overseeing the Sohar Port South expansion is Sohar International Development Company (SIDC), which is a 50-50 joint venture between the Omani government and the Port of Rotterdam.

“Gulf Mining, one of the industries within the port, are constructing five ferrochrome smelters to boost metals output. Investment in the smelter will provide an essential boost to the growth of our metals cluster and will complement and support the iron and aluminium industries at Sohar,” says Geilenkirchen. The metals cluster is one of the fastest growing divisions at the Port and have a high economic yield. Research indicates iron industries and their by-products experience significant growth as long as they continue to strive to meet demand. Another major project was the production of antimony, a mineral which is primarily used as a fire-retardant.

“Additionally, we have signed a US$ 60 million deal with a UK-led consortium which will see Sohar house the largest rare earth metal plant of its kind outside of China,” he says.

“We are characterising 2018 as the year of ‘Smarter Thinking’. The main feature of this concept is one that encourages the sharing of innovative ideas to modernise and simplify operations, and at the same time become more efficient,” says Geilenkirchen. For example, the steam produced by the oil refinery at Sohar is a by-product of their operations but has significant energy potential. “To tap and utilise that energy, we are planning to build a pipeline to carry steam to other industries. The heat from the steam can be used as an energy source to produce subsequent products, and will therefore reduce energy loads and costs. To reduce operating costs, we’re also conducting a study to convert our port vehicles to run on hydrogen; another underutilised by-product from the industry. Additionally, we are installing PV solar cells around our head office, which will reduce the amount electricity drawn from the power grid,” Geilenkirchen says.

One of the most significant projects was the signing with India’s Pittie Group, which is one of the biggest cotton yarn manufacturers in the world, for a US$ 300 million cotton yarn project. The project, when completed, will produce 100,000 tonnes of cotton yarn per year and generate over 1,500 sustainable jobs in the Freezone.

With the establishment of Oman’s first bitumen refinery, the new plant will significantly reduce the reliance on imports of bitumen and asphalt for road paving and industrial applications. Due to the growing local and global market for asphalt and bitumen, the project will create new business opportunities and employment in the Sultanate, with 34 direct jobs for citizens generated in the first phase of operations

In total around 26 companies are already reaping the benefits of unrivalled access to land, low-cost energy, and skilled workforce in the region

The Middle East plays a critical role in the Chinese ‘One Belt One Road’ initiative. The development of modern land and maritime silk routes will stretch from Shanghai all the way to Hamburg. “Due to the prime location of Sohar outside the Strait of Hormuz, we are ideally located as an important connecting hub on these maritime routes, and can direct cargo through the Suez Canal or around the Cape, depending on the vessel size and its final destination,” says Geilenkirchen.

“In 2016, we signed a sister port agreement with the Port of Shenzen in the People’s Republic of China. The agreement covers the development of mutually beneficial trade and shipping businesses and helps increase trade relations between China and Oman. Our relationship with the Port of Shenzen is proving highly effective in areas such as port planning and construction, management and operations, environmental protection, information technology, personnel training and port security,” concludes Geilenkirchen.